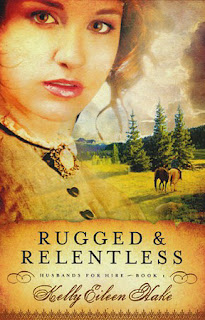 Summary: Evie Thompson and her three best friends move to the wilds of Colorado looking to recover lost money, nurse their friend back to health, and claim husband for themselves.  Thus they come up with the idea to place an advertisement and hire for husbands.  They get more than they bargained for as two dozen men descend on the small town.  Jake is haunted by the death of his brother, promising vengeance, and by the cooking of a beautiful young lady back East.  Imagine his surprise when he discovers her in Colorado surrounded by other men who might marry her.  As he looks for his brother's killer, he also has a bit of time for courting the spirited Miss Thompson...who may or may not allow him to.

In short, I loved this book.  It was absolutely delightful and I flew through it, putting off homework in order to read just a few more pages.  While the basic premise seems to be a romance, it's actually more about friendship especially among the four ladies.  Evie, her sister Cora, friend Lacey and Lacey's cousin Naomi had a strong friendship.  They were able to formulate this plan and their strengths complement each other well.  While Evie is the main focus, the book shifts perspectives to all of them.  I will be very interested to see their stories in the later books.

They faced many obstacles.  One of those was Braden, Lacey's brother and Cora's fiancee although he attempted to end the engagement after his near-death and subsequent injuries.  Despite being confined to bed, he still attempts to act very high-handedly and to order them around.  Jake is another obstacle as he sees the dangers of four lovely ladies surrounded by approximately twenty-four not always honorable men, eager for female companionship.  He and Evie sure had sparks and multiple confrontations that revealed their characters and helped them fall more in love!

Then there is the man who killed Jacob's brother who is part of the camp although he is a wily one for sure.  The resolution of this storyline was very rushed and not entirely satisfying although I did like the final confrontation.

The historical elements were another pleasant part.  The ladies are not conventional, as you can see by their move across country, but they are still confined by societal norms.  They wear corsets, tend to stick to "womanly" pursuits, and frequently have men interfering as if they know best.  Luckily the women are spirited and they argue and push back in lively conversations.  I chuckled more than a few times at the way they interacted with language in conversations with Braden and Jake.

While I've seen it shelved as Christian fiction, I found those elements minimal.  Evie relies on the Lord and Jake grows a bit in that regard but it's not as overt as others I've read.  It did not impede my enjoyment in the least but other people may find that disappointing.

Read for Ebook Challenge.
Posted by The Insouciant Sophisticate at 12:01 AM