Pearl in the Sand 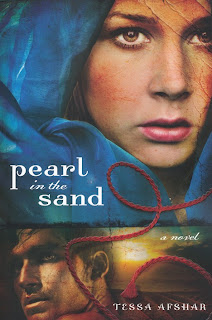 Summary: Rahab, the former zonah and yet faithful servant of God, wife of Salmone and mother of Boaz, husband of Ruth and what do we know about her? Afshar takes on her story in this lovely historical book.

Thoughts: I chose to read this because of the Christian Book Club but I wasn't sure what it would be like.  I was intrigued by the idea of this Canaanite harlot marrying a Jewish leader and bearing Boaz who marries Ruth, probably my favorite Biblical female.  I'm really glad I read it though.

Rahab obviously has some serious issues to lay before God.  First her family sent her in to prostitution at the age of 15.  And she harbors anger at especially her father for this, shame at the fact that she did so willingly in order to take care of the family, and fear about being left by a man because she thinks she's unlovable. But she has a deep thirst for God as soon as she hears about Him.  Even before she knew, she recoiled at much of the Canaanite idolatry.  As she learns, she has an almost innate understanding of God but she maintains her amazement at His glory.

Salmone also has issues as he struggles with pride and his role as a leader of Judah.  He had previously been married but had not shared a deep spiritual life with his wife.  He thinks that he could have that with Rabah but he worries about dirtying his lineage by mingling with a Canaanite.  God teaches them both a lot.

The other characters were good particularly Salmone's sister Miriam and Joshua who plays a pretty big role.  These and other characters are useful in demonstrating God's character.  For example, Rahab's sister feels God's forgiveness for her idolatry and He fills the biggest gap in her life.  Miriam struggles with graciousness among other issues.

The epilogue was also great; while I don't usually like them, this introduces Boaz and his parents muse about what kind of woman he'll grow up to marry and how his children will be used by God.

There were two things I didn't really like. First, as a personal preference, I didn't really like the battle scenes.  I understand that Israel is fighting and claiming the Promised Land but I don't like to read those kinds of stories.  Luckily there is a lot more emphasis on the personal side than on the war.  The other problem I had was in the writing style.  Sometimes there were long monologues for characters and it seemed more didactic than how people actually speak.  Some of those passages I liked; some of them I skimmed.

Quotes: I don't usually include quotes but there were two I loved so I'm including them (quotes come from an ARC on Netgalley so they are not necessarily the actual page numbers).

"Son, a woman needs to feel safe in love. She needs to know her husband accepts everything about her and still loves her. To be known through and through, including the failures of her past, the shortcomings of her character, and still be loved, that's the Promised Land of a woman's heart" (238) -Joshua educating Salmone

"It was as if a shaft of love pierced her walled-in soul, and she felt for the first time that she was loved beyond reason, and esteemed far beyond what she deserved...She was worth being cherished..." (294)  -Rahab feeling God's love

Cover: I was not impressed by the cover and only picked it up for the Christian Book Club.  I think I don't like the two faces separated; I'm not sure what exactly displeases me about it.
Posted by The Insouciant Sophisticate at 12:01 AM