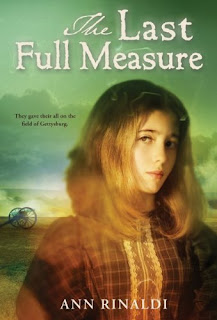 Summary: Tacy is a young girl in the town of Gettysburg, PA with two brothers serving in the army and her father gone as a doctor in 1863.  This leaves her at home with her crippled older brother and her mother as battle approaches.  The battle and its aftermath challenge Tacy and leave her scrambling to make sense of this terrible war.

Thoughts: I remember loving Ann Rinaldi's fiction especially Time Enough for Drums and In My Father's Room; I remember them seeming terribly romantic. This one though is more middle-grade with a 14-year old protagonist who seems a lot younger.  This is not helped by her language which is not always perfectly correct English by today's standards but probably good enough back then.  I think the fact that Tacy is so young was a reason that I didn't like this book; I had trouble connecting with her youth as I prefer an older protagonist.

Her brother David was a bewildering character.  One minute he's loving, then he's angry.  He wants to be helpful, he's outraged and making Tacy cry.  I could not get a handle on him and did not enjoy reading about him.  His role in the story is rather important but I did not care about it.

Then there is the speed of the plot: perhaps it's an accurate representation of war.  Sometimes everything was happening so fast and then it seemed like nothing was happening.  The ending in particular moved fast, with two important deaths, Lincoln's visit to Gettysburg, and a bit of happy news.

I did appreciate the fact that it looked at the civilian population of Gettysburg though.  I feel like most Civil War books focus on the Southern perspective where the war was literally fought instead of examining the North (the winners-woot!)  I've never read a novel focusing on this aspect so I liked that.  Historically it seemed pretty accurate.  I was surprised by how much food they had but then the North was not under a blockade and was perfectly capable of supporting itself unlike the South.

Something Rinaldi shared in her author's note is that she wanted to discuss the presence of a free black community in Gettysburg, something I knew nothing about and I bet most people don't either.  Tacy has a black friend Marvelous and some tensions develop that Tacy has to deal with as she learns and grows from the experience.

Overall: Youngness of main character off-putting to me; Different side of Civil War shown.

Cover: Her hair is weird to me-I feel like it's too light compared with all of the other colors on the cover.
Posted by The Insouciant Sophisticate at 12:01 AM