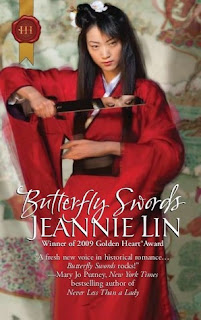 Summary: Princess Ai Li flees her wedding processional and runs in to westerner Ryam, a foreigner but someone she feels she can trust.  Now they must return to her home city so she can warn her emperor father about betrayal all the while fighting her off her fiance's warriors and their own growing attraction.

Thoughts: I thought the red on the cover was very striking and I was interested to try a historical romance that wasn't set during Regency times (although that is still my preferred time period).  I was a bit confused about everything; although I have taken a Chinese imperial history class, it was a while ago.  Thus I recognized the Tang dynasty and I quickly figured out that this story was set during a time of upheaval, even as the period as a whole was enhancing culture.  Although this is a romance, I was much more interested in the historical aspects than the love story.

The main characters are Ai Li, an imperial princess, and Ryam, a western barbarian.  I really liked Ai Li; she was strong, had talent with her butterfly swords, had the capacity for love, and high standards for honor.  Ryam is struggling more because he believes himself a failure in command and that he doesn't fit in with her culture.  I really enjoyed reading about them trying not to succumb to lust and I liked it less once they did.  I much preferred the sexual tension.

And at the ending, the main problem seemed resolved fairly quickly.  Ai Li was supposed to marry warrior Li Tao and thus secure his loyalty to her father the emperor but instead Li Tao and Ryam fight for her.  And then Ryam and Ai Li go off together with her father's acceptance.  It might help if there's a sequel showing Li Tao raising a rebellion against her family or something because I didn't get closure from that aspect.

There were also four secondary characters I really liked. Lady Ling, a former courtesan at court; Princess Miya, a former princess now married to a westerner; Ai Li's mother, a stoic, honorable woman; and Ai Li's grandmother, who was supposed to fight Ryam to see if he was worthy of Ai Li.  I enjoyed their brief appearances and I would especially like to know more about the grandmother.

Overall: Okay romance but I wanted more of the history!

Cover: Beautiful-I love the bold red!
Posted by The Insouciant Sophisticate at 12:01 AM