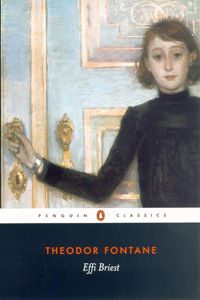 I guess kind of spoilers but the book's over 100 years old so I'm not sure it really matters.

Summary: Effi Briest is a young Prussian aristocratic girl who makes a smart match with Baron Geert von Instetten.  But Geert is didactic and doesn't treat Effi as she might wish.  Thus she has an affair.  Six years later, he discovers her indiscretion and duels her lover. Additionally he divorces her and she ends up dying at the age of 29.

Thoughts: I read this for a class and as I was doing research was surprised to find that it is kind of considered part of an adultery trilogy with the far more famous (although I haven't read them yet) Madame Bovary and Anna Karenina.  I had never heard of it until it was assigned but Thomas Mann has considered it one of the greatest six books.  I'm not sure if I concur but it was a pretty good read.

We read it because of its observations about the stratified nature of Prussian society.  While it is technically unified Germany (post 1871), the main characters are all Prussian aristocrats who live their lives of privilege rather separately from the rising bourgeoisie and certainly from the peasants and workers.

Effi is a sweet girl.  She's 16/17 when we first meet her and her husband Geert is 38 and was kind of a boyfriend of her mother's-ew! But she accepts this as an appropriate match, rejecting the bourgeois notion of marriage for love.  He treats her like a child but they are mostly happy excepting the affair.

The thing about the affair is that if you didn't know what this book is about, it's a revelation that she had an affair.  It's incredibly subtle to modern readers (or at least most of the people in my class including my professor the first time he read it).  She goes off in the woods alone and we never really see the couple interacting.  I mentioned that her husband discovers letters six years later; first Effi is an idiot for not burning the letters but second it's important that it was more than five years because that's the end of the statute of limitations.  That's right, if a woman committed adultery and her husband found out within five years, he could prosecute her.  Note male adultery was not even a misdemeanor.  While he cannot legally take action, he still has internalized aristocratic notions of honor and thus challenges her aristocratic lover.  If the lover hadn't been an aristocrat, then he could not have given satisfaction to Geert.

After the affair, she lives alone without her daughter who Geert turns against her (heartbreaking!) Then she returns home to her parents where she eventually dies.  Speaking of her parents, Parmee in the introduction mentions that some of their scenes could almost come out of Jane Austen; I approve of that statement and enjoyed reading those parts because of that.

Overall: Rather good; important historically but that doesn't mean it's not enjoyable.

Recommendations: I would definitely recommend this if you've read Madame Bovary and/or Anna Karenina so that you can tell me about similarities and differences between them.  Also if you're interested in reading more German literature.  I really only know Goethe but I would like to read more.

Sorry this was so long but thank you for reading or even skimming it.  I actually have still more to say and would love to talk about it with you if you've read it.  My email is on the side and in my profile.
Posted by The Insouciant Sophisticate at 12:01 AM