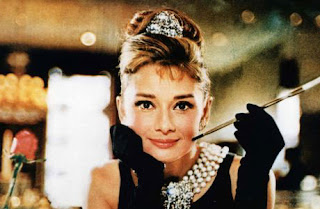 Breakfast at Tiffany's, 1961
Starring Audrey Hepburn and Mickey Rooney
Directed by Blake Edwards
Based on a novella by Truman Capote

I will admit that I'm not a big fan of this movie but after watching some really violent war films, my friend and I wanted to watch a film that a. featured no deaths and b. had some women.  Check and check plus the bonus of an adorable cat!  Of course there is Rooney's awful racist portrayal of a Japanese landlord which left us cringing and is definitely a minus.

But I loved her clothes and I could almost buy this as a romance, especially with the ending in the rain.  Overall I would say that you should see this film if you haven't!
Posted by The Insouciant Sophisticate at 12:01 AM