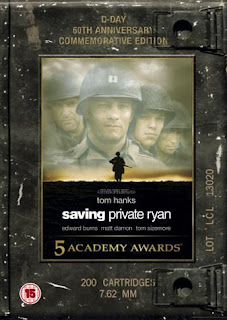 Summary: Beginning on D-Day, this traces a group of American men who must find Private Ryan to return him home to his mother as his three brothers have all died in the war.

Thoughts: I had started to watch this another time but got derailed because it is so long and difficult to watch.  Then my friend found out that I hadn't seen it so she said we should.  I don't really have much to say. Tom Hanks is amazing of course. The ending made me cry and as I type this I'm tearing up again remembering it.

I mentioned Nathan Fillion above even though he has a very small role because it made me smile and I was so pleased to recognize him.

I'm not sure how realistic all of the battle scenes are (re troop actions, weapons used) but it was an awful experience to watch the men fall and hear all of the noise.  While I already knew that war was hellish, this confirms that impression.

To go in a different direction, I've heard it said that Shakespeare in Love should not have won the Best Picture Oscar over this film.  I personally prefer SiL to SPR because it had a female lead (SPR has no major female characters) and it's a comedy, a genre frequently ignored or denigrated by the Academy in my observations.  Of course it's hard because both are really good films and in different years each could have emerged as the clear contender.
Posted by The Insouciant Sophisticate at 12:01 AM