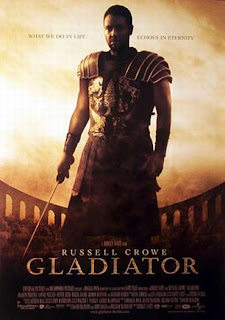 I watched this as part of my quest to watch all of the best picture winners.  My friend said it was really good and I mostly agree.  It was very different from what I expected.

I thought that Russell Crowe pissed off the emperor Joaquin Phoenix and was then forced to participate in Gladiator games to his death.  There is actually more to the story.  Emperor Richard Harris wants Russell Crowe to take over and restore Rome to a republic; presumptive heir Joaquin Phoenix does not like that and wants Crowe dead.  Crowe manages to survive and ends up a slave fighting for sport before appearing before emperor Phoenix.

There is a lot of violence, blood, and death (after all the film is rated R).  I generally prefer funny movies and well this is not one but it is still worth watching when you have a chance.
Posted by The Insouciant Sophisticate at 12:01 AM