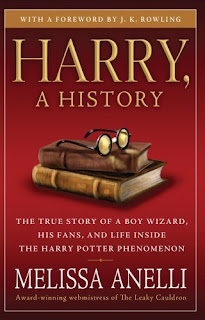 Summary: Anelli started as a fan of HP and soon emerged as the webmistress of the Leaky Cauldron.  She sets out to investigate the phenomenon that is Harry in this book.

Thoughts: I grew up with Harry although I cannot claim to have been one of the first readers; I was probably 8 when I read Sorcerer's Stone and then I was 17 for Deathly Hallows.  Thus I missed out on a lot of the sensation at the beginning being a. young and b. rather sheltered.  It was interesting to read about the passionate immediate fans and the explosion.  From my POV, it really exploded in anticipation of HP5 but this book helps fill in the spaces.

Two particular things bugged me.  First Anelli's description of herself immediately post-graduation.  Basically she sat around mooching off of her parents and complaining; that really turned me off.  Second, she's kind of a ***** about people who shipped H/H.  Now that bothered me as someone who yes does like Harry and Hermione.  I feel like the smart heroine and the very heroic hero could belong together; Ginny is still a bit of a Mary Sue to me; and I just never really liked Ron-he rubbed me the wrong way.  I do not persist in championing H/H because the books are done although I do block out the epilogue (there are other reasons for that).  But I hated the way she wrote about H/H vs R/H and that soured me on the book.

Overall: A competent narrative although I wish she had changed her focus to inside rather than outside the books.

Cover: Cute.
Posted by The Insouciant Sophisticate at 12:01 AM