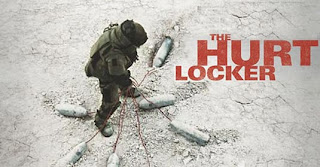 Summary: A look at a team that disarms improvised explosive devices (IEDs) and the brash team leader and his two compatriots in post-invasion Iraq, 2004.

Thoughts: I was so excited about this and I couldn't wait to see it, whether by buying the DVD or renting it from the library.  A couple weeks ago I finally had the chance to see it.  And well...I really didn't like it.  I don't know if I overhyped it in my head, if I was a bit worn out because I watched it right after Saving Private Ryan, or if it's just not the kind of film I like (quite probably all of those reasons).

It opened strongly with a suspenseful ten minutes that had me sitting on the edge of my seat (not literally, I sprawl when I watch movies).  And then it just went on and I didn't like it.  I really like Pearce (Memento-yeah!) and Renner (I loved him on The Unusuals which is on hulu for Americans who might be interested).  I didn't know the other actors but they were fine.  It was the story I didn't like.

I'm really disappointed that I didn't love this movie.  But it still counts toward me watching all of the best picture winners (remember I'm over halfway there!)
Posted by The Insouciant Sophisticate at 12:01 AM