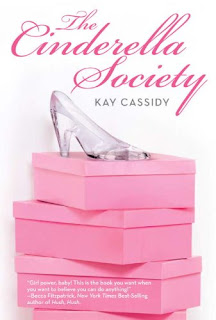 Summary: Jess is looking forward to the summer when she can escape Lexy, the bully who has targeted her for the past few months.  Until the last day of school when she receives an invitation in to the Cinderella Society.  These Cindys fight the Wickeds (Lexy being a member) and help protect the Reggies (regular kids) from their influence.  Suddenly everything changes for Jess.

Thoughts: I love anything to do with Cinderella so when I saw the title of this, I knew that I'd be reading it at some point.  But it wasn't quite what I expected.  In some places it read like a self-help guide.  And sometimes it was very shallow as Jess focused on clothes and outer appearances when that was obviously not what the Cindys were about.  Jess's extremely low self-confidence was also annoying; I understand that the teenage years are tough (um, I was a teenager) but when she dwelled on how perfect the other girls were and how not she was, I just wanted to throttle her.  She's been chosen to be part of this awesome organization and she persists in thinking she's not worthy.

Speaking of the organization, I like the idea of powerful ambitious women coming together and working to improve the world but the level of secrecy and not completely understanding the power structure makes me leery of it.  They also seemed a bit simplistic at times; the fact that the Wickeds bear that name seemed unfair as they have some good in them (probably).

Another issue I had was the portrayal of Jess's crush Ryan who had some extreme mood changes although it seems like they're pretty settled in the status of their relationship by the end (whether that's friendship, love, or hate would be a spoiler).

Overall: Cute story bogged down with self-help guidance.  Not sure if I want to read the sequel.

Cover: So pretty with the glass slipper and the pink!
Posted by The Insouciant Sophisticate at 12:01 AM