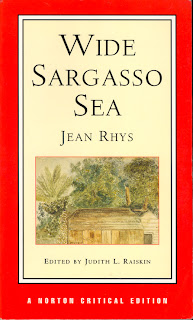 Summary: A postcolonial and feminist novel exploring the life of "Bertha Rochester," immortalized as the madwoman in the attic, the wife of Jane Eyre's love Rochester.  But was she a madwoman? Where did she come from? How did she come to such an end?

Thoughts: Somehow I thought this was part of my FITG challenge which is why I picked it up.  But apparently my memory fails because it is not.  Still I wanted to read this response to Jane Eyre; I'm not a big fan of the Brontës as I think I've made clear but I still keep trying to force myself to like them.

I really liked it.  I wasn't sure what to expect and it was confusing at first as I tried to understand the social position of the Cosways.  They are a former slave owning family, surrounded by former slaves who loathe them.  Yet they are not rich and are not fully European.  They are caught between two worlds and this is particularly important to understanding Antoinette (Bertha).

It alternates between Antoinette and Rochester's point of view (although I'm not sure he was ever named).  She narrates her childhood.  Then he comes.  He is slime; sent there by his family to marry wealth, he grows to despise her.  He takes her money, has a sexual encounter with a servant right next to her room, and hates her.  She wants his love desperately and he refuses.  In the end, he takes her to England where she eventually starts the fire that takes her own life.  She feels it's better that way...and I don't think she's wrong.

The importance of names and their power is seen here.  Originally she is born Antoinette Cosway; then her mother remarries and her last name becomes Mason; then she marries and is known as Antoinette Rochester; then he renames her Bertha.  He ******* RENAMES her because he doesn't like her original name! I'm so angry about that.

As a next step, I would like to read literary criticism of it because I think that will help me get more out of it.  Although I am not the best reader of classics, I am trying to read more in order to become a more well-read person.  There are probably a lot of things I missed, although I still enjoyed the book.

Overall: I would recommend this to people who've read Jane Eyre with the caveat that the style is very different.
Posted by The Insouciant Sophisticate at 12:01 AM