In For a Penny 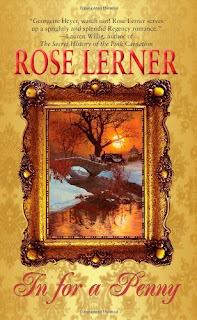 Summary: After Nev's father dies, he is in desperate need of money.  He turns to fabulously wealthy but untitled Penny, asking for her hand in marriage because he needs money.  While Penny is pleased in her elevation in status, she finds that her new role comes with the pressures of restoring Nev's family's estate, navigating her role in the family, dealing with his aggrieved tenants, and a menacing neighbor.  Nev and Penny must rely on each other...will it be enough?

Thoughts: I saw this when it first came out, mentioned on quite a few blogs and I was intrigued especially because of the glowing reviews I read.  I was pretty pleased with the novel as a whole with a few big problems.

I fell in love immediately with the very charming Nev and Penny.  I was very invested in their relationship and I liked that they got married earlier on so that most of their romance was them learning to navigate marriage.  They really grew to love and care for each other.  I also adored her parents and I even kind of liked his mother although she's a total snob and is rather mean to Penny.

Then there are the things I didn't like. I did not really enjoy the social commentary; it's very different from the romance novels I know best.  I could have appreciated it more if I had been expecting it.  Basically the tenants on Nev's lands have been oppressed leading to them poaching and violent retribution in turn from Nev's neighbor.

While the couple started out charming, they got a bit old with their constant worrying about the other.  Penny worried about being a lady, about being charming enough, and about Nev lying to her.  Nev thinks he's not good enough for her (rather true!)  They both want the other to love them but are too embarrassed to speak truthfully with each other.  I can handle a bit of that in a romance novel but it went on too long for my taste.

And a few quick ones that make more sense if you've read it: The villain was a bit overdone.  I did not appreciate seeing Nev's ex-mistress resurface.  Louisa=brat!  I did not gain closure from Lerner's treatment of her and I maintain a grudge.

Overall: I'm happy that I read this and I will keep an eye out for Lerner's next novel, A Lily Among Thorns.

Cover: Very different from other romance novels (nothing embarrassing) and the somewhat melancholy air captures the social commentary aspect of the novel while the gold relates to money, in my interpretation.
Posted by The Insouciant Sophisticate at 12:01 AM