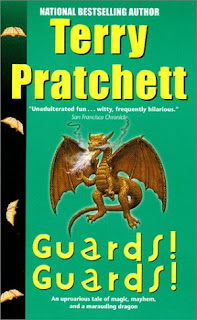 Summary: A mysterious group decides to summon a dragon in order to overthrow the Patrician and install a king who will malleable to their will.  Meanwhile Sam Vimes is an alcoholic captain of the laughable Watch who finds hidden strength when confronting this crisis. [But really the plot's not that important.]

Thoughts: After reading Thud, I really wanted to read more novels of the Watch.  This is the first one focused on the Watch and it is far different from the much later Thud.  Here the Watch is a joke with four (loyal) members; this is also the novel where he meets his wife, Lady Sybil who I adore.  Their love story, which is not the focus if you're someone who doesn't like love stories, was my favorite part.

But there are also a lot of funny bits.  Carrot is a human raised by dwarves who does not understand figures of speech and has tremendous strength.  He is important to revitalizing the Watch. We also see Nobby and Colon who continue in the Guard.  Then there is the Patrician, my third favorite Discworld character (after Death and Moist von Lipwig).  He gets some great lines here and I loved getting to read more about him.

Overall: Another funny story with a bit of a romance that really elevates the book for me.

Quotes:
"A book  has been taken. A book has been taken? You summoned the Watch...because someone's taken a book? You think that's worse than murder?" -Yes the Librarian does think that, p.108

"Never trust a ruler who puts his faith in tunnels and bunkers and escape routes. The chances are that his heart isn't in the job." -Sound advice from the Patrician, p. 286

Cover: Love the green! And the dragon is fitting.
Posted by The Insouciant Sophisticate at 12:01 AM