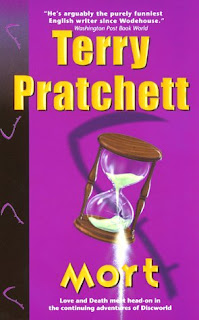 Summary: Mort has been chosen as an apprentice to Death.  As Mort tries to tamp down his human side (which keeps insisting on fairness), Death tries to experience the life of a human.  Neither is quite successful and Death and Mort end up dueling.  But all ends well in Discworld!

Thoughts: This is actually the fourth Discworld novel to be published.  I'm more familiar with Pratchett's later work so it was interesting to read a book from the start of the series.  I was super excited about this because Death is my favorite character in Discworld (well tied with Moist von Lipwig).  He is an anthropomorphic personification and he is so much better in these books than in other books which have also used Death as a character.  In this book, he takes Mort on as an apprentice.  Mort is introduced to the mysterious Albert and to Death's daughter Ysabell.  On one of his first solo jobs, Mort accidentally doesn't kill a princess which sets in motion the main plot.

Meanwhile Death is off trying to experience happiness through gambling, drinking, and other human activities.  He also has a fondness for cats, which endears him even more to me; you know, people can be so mean to cats sometimes and it just breaks my heart.

You can kind of tell that it's an early book because it's so narrowly focused; I feel like the later books I've read tie together more strings and are just generally more ambitious.  That doesn't make this a bad book; it's just one of the differences I noticed.

Overall: A good entry in the Discworld series; recommended for fans of Death.

Challenge: This is the fourth book for my Terry Pratchett challenge.
Posted by The Insouciant Sophisticate at 12:01 AM