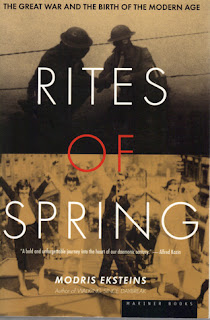 Summary: A new examination of WWI, its origins, actions, and aftermath on the twentieth century.

Thoughts: I read this for class and I enjoyed it a lot.  It's not too scholarly (ie not esoteric) but it is in depth looking at motivations for war on all sides, art, literature, the battles, etc. as well as looking at the end and the lead up to Hitler.  I appreciated the fact that I didn't have to be a WWI scholar to follow what was happening.

One problem I had was that he had the war ending and then jumped ahead to Charles Lindbergh's solo flight across the Atlantic, which skipped almost ten years.  I'm not sure I understand the reason for doing so.

Overall: An interesting cultural history of WWI.
Posted by The Insouciant Sophisticate at 12:01 AM