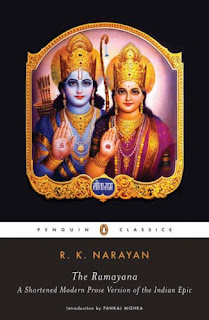 Summary: The epic of Rama, the god Vishnu in human form, and his quest to rid the world of Ravana.

I loved this book.  I thought that I was vaguely familiar with the story as I read it and I think I may have seen parts of a filmed adaptation at some point.  This is a shortened prose version so it has lost some of its embellishments; I imagine that this would be a very fun story to hear as the storyteller would add little bits of color and points of interest, tailored to fit the audience.  However as a book, I think it works in the shortened version.

It moves along fairly quickly but with side stories and diversions as might be expected in an epic.  Rama's eventual quest to destroy Ravana comes about because his beloved wife Sita is kidnapped by Ravana.  However before he can finish the task, he meets many other creatures and has many other adventures that burnish his reputation.

Overall: A fantastic story that I highly recommend for Westerners as we're probably not familiar with the story.

Cover: Rama is apparently always represented as blue although I'm not entirely sure why.
Posted by The Insouciant Sophisticate at 12:01 AM