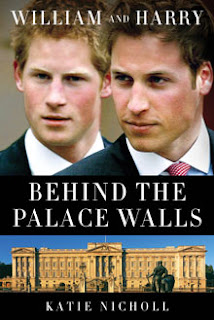 Summary: An insider's look at Princes William and Harry as written by royal reporter for the Mail on Sunday Katie Nicholl.

I know I'm an American but I've been fascinated with the modern British royals, partly due to my mom's love of Diana and I'm so excited for the royal wedding which incidentally automatically dates this book.  When Nicholl's published it, the engagement had not yet been announced although she was fairly confident the wedding would take place in 2011 (side note: cannot wait to see the dress-Catheirne's so tall and pretty that she can wear almost anything).

But as to the book.  The beginning was good, providing information on the childhoods of the princes which may be familiar to some but not to me, given that I am a bit younger than they are.  In fact, I enjoyed the book up to about the time that they started acting out, partying and drinking all the time.  This was mostly because I find that behavior absolutely reprehensible.  They are part of the highest rank of privilege and they wasted it with their drunken parties; that was also the part that made me glad to be an American with a republic!

Another part I didn't like was the several chapters describing in detail Harry and William's military service.  I have no interest in that and it also raises another point about sources.  I recognize that Nicholl wants to protect her sources and that they want anonymity but how truthful are we to believe the sources are.  And frequently she writes about how the prince might be feeling which she has no power to do unless they, for some inexplicable reason, talked with her and shared exactly how they felt at the time.  Nicholl also inserted herself into several sections, talking about when she reported a story and that took me out of the story.

One little peeve was inconsistency in terms: she used feet and miles for distance but pounds for the money.  I would have preferred to see kilometers and pounds or feet/miles and dollars.  I think this book was written for an American audience so conversion of the pounds into dollars, even just in parentheses, would have been helpful.

Overall: Some interesting bits-perhaps check out of your library, like I did, and skim for new information.

Cover: I think this might be Buckingham Palace and of course the boys are cute, although I would prefer them smiling.  Probably these were the only ones authorized.
Posted by The Insouciant Sophisticate at 12:01 AM