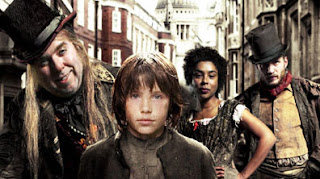 
Part 2 of Oliver Twist Readalong as hosted by Allie at A Literary Odyssey
This part was weird and seemed divided into roughly two sections.  The first section was boring to me as it talked about everyone but Oliver, suggesting that the boy was left dead in a ditch as Bill Sikes ran for his life. I knew of course that Oliver wasn't dead although that would have been a very interesting twist!  For me, I found these chapters to be more stereotypically Dickens with many long sentences and description.

I much preferred the second section where Oliver meets good people who love him and want to take care of him, helping to turn him into a healthy little boy.  The only problem is that there didn't seem to be much plot.  I know that Oliver has to return at least once more to Fagin and the gang before achieving a happy ending for himself but there were just chapters of Rose being ill and then recovering (how did she even get sick?) and the aftermath.  I did feel like it could have been shortened though.

I'm very excited for the last third which will a. explain who Monks is; b. give Oliver's history; c. probably make me cry, re. Nancy; and d. wrap everything up.  It's about 160 pages (including illustrations) which would be enough for most people but as Dickens is, ahem, long-winded, I hope I don't feel cheated or rushed too fast to a false-feeling conclusion.
Posted by The Insouciant Sophisticate at 12:01 AM