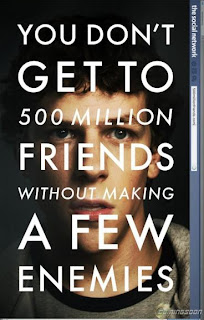 The good: First, Andrew Garfield is really hot in this! I had been seeing pictures of him on the awards circuit and I didn't quite get it but now I do and it makes me that much more excited about his performance in the new Spiderman.
Jesse Eisenberg is also good in an unsympathetic role; Zuckerberg seems to be fueled by spite and has little to no compassion for other people.
Rooney Mara, the American Lisbeth Salander, is also good in her handful of scenes as the girlfriend who dumps Zuckerberg and who he wants to prove himself to.
The script is also fantastic as you might have guessed from seeing that Sorkin wrote it.  It's very entertaining.

The bad: Justin Timberlake. I'm fine with JT in the music business but I do not want him in movies because he's awful.

While I mostly liked The Social Network, I definitely preferred The King's Speech and I'm rooting for it to win big tonight! What about you? Do you follow the Oscars? Will you be watching tonight?
Posted by The Insouciant Sophisticate at 12:01 AM