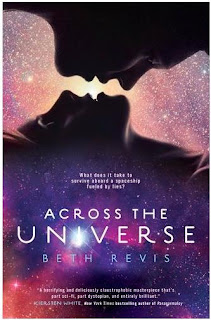 Across the Universe by Beth Revis
Razorbill, 2011
398 pages
YA; Science-Fiction
Read for YA Debut Challenge
4/5 stars

Source: Library (Picked up only 5 days after it came out!)

Summary from goodreads: "A love out of time. A spaceship built of secrets and murder. Seventeen-year-old Amy joins her parents as frozen cargo aboard the vast spaceship Godspeed and expects to awaken on a new planet, three hundred years in the future. Never could she have known that her frozen slumber would come to an end fifty years too soon and that she would be thrust into the brave new world of a spaceship that lives by its own rules.
Amy quickly realizes that her awakening was no mere computer malfunction. Someone-one of the few thousand inhabitants of the spaceship-tried to kill her. And if Amy doesn't do something soon, her parents will be next.
Now Amy must race to unlock Godspeed's hidden secrets. But out of her list of murder suspects, there's only one who matters: Elder, the future leader of the ship and the love she could never have seen coming."

What I Liked:
-The characters especially Amy, Elder, and Harley.  Their personalities popped and I felt for each of them.  Less prominent characters like Steela and Orion still caught my attention in the times that they appeared but the first three mentioned were among the most important.  Amy is a fish out of water, Elder is struggling with the knowledge that he will be leader, and Harley is trying to survive.  I loved all of them.
-The writing-very strong, especially for a debut.
-The rewritten history learned by students on the ship, as in Hitler was a great leader because he unified his people along monoethnic lines and Lincoln ended the Civil War by sending all of the black people to Africa.  The first made me gasp a bit but as I realized what had been done, I enjoyed it and wished there were more tidbits of the new history.
-The optimistic ending.  Nothing definite is set but the future could turn out well for the surviving people.
-The cover: very striking and appealing.

What I Didn't Like:
-The dystopian elements all felt really familiar.  Dystopian isn't the main genre I read so I was surprised that none of those parts surprised me.  As each piece was revealed, I thought "Of course; why didn't Amy or Elder figure this out sooner?"
-The descriptions, while good and necessary, sometimes ran too long.  At times, I just wanted something to happen.

Heartbreaking:
-Amy's parents are the reason she is on the ship.  They both wanted to be a part of creating a new world (mom's a geneticist; dad's a tactician) but they were willing to part with their daughter in order to do so.  She had the choice to remain on earth and die before they ever reached their destination or to come with them.  She obviously chose the latter but may never see them again.

Overall: A great debut, especially for those who love science-fiction and dystopian.

Cover: Gorgeous cover!
Posted by The Insouciant Sophisticate at 12:01 AM