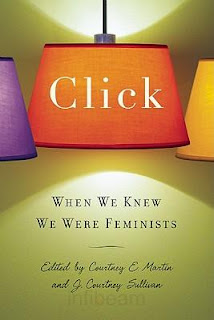 Summary: A collection of essays from some well-known feminists describing the "click" that made them know they were feminists.

Thoughts: I saw several reviews of this and I was really looking forward to it.  While all of the essays were readable, none of them worked for me.

I saw many commonalities across the essays: women who rebelled against gender constraints, women supported by other women in the feminist movement, women proud of being a feminist, women who are outspoken and confident.

But I didn't feel any connection to the stories.  I didn't see my "click" moment represented.  Now that's partly because I'm not entirely sure when that was and I know that I would be unable to write something as well as these feminists.  But I think I wanted to find someone very similar to me with whom I could identify and I didn't.

Overall: Some good stories, all well-written, but none that "clicked" with me.

Cover: I really like the colors but it's nothing exceptional.
Posted by The Insouciant Sophisticate at 12:01 AM