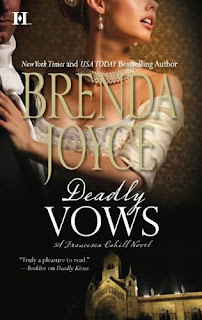 Source: Received a free egalley via Netgalley in exchange for an honest review.

Summary:  It is Francesca Cahill's wedding day, where she will finally marry Calder Hart after clearing his name in the murder of his mistress in the previous book.  Unfortunately she receives a note calling her to a gallery to recover the stolen nude portrait of herself that would destroy her reputation if shown; when she arrives, she is locked in and thus misses the ceremony.  Calder instead of attempting to understand breaks the engagement and shoves her toward his half-brother and her friend Police Commissioner Rick Bragg as they attempt to recover the painting and figure out who wanted to ruin Francesca.

I did not realize this was the ninth book in the series when I requested it from Netgalley but it looked so good that I couldn't wait until I'd read some of the earlier books before I started it.  I struggled a bit with the relationships but I think I had a pretty solid grasp on them by the conclusion.  As there are strong elements of three genres, I found it useful to divide my review along those lines.

1. Mystery: This was the strongest element for me; Francesca has investigated and solved cases in eight previous books, leading up to her entanglement in a case as the victim this time.  Someone had earlier stolen a nude portrait of her and seemed to be waiting to use it to blackmail her.  They also lured her away on her wedding day and locked her up, causing her to miss the ceremony.  She has three main suspects, all previously antagonists to her, and I thought the mystery unfolded at a good, logical pace.

2. Historical: Set in 1902 (each chapter opens with date and time), there are mentions of cars, telephones, and the high society of Old New York.  I would have liked some mentions of President Theodore Roosevelt but that's just obsessive me.  At first, I thought much of the language was stilted and formal but I realized that it was actually very time-appropriate. However she sometimes called her parents Julia and Andrew, which seemed wrong to me.  Francesca's general personality is more modern and she doesn't generally feel limited to the norms of the time, as shown by her investigations and her willingness to pose for a nude portrait.

3. Romance: This is where most of my problems were.  Now it's a Harlequin so I was expecting a fairly clear-cut romance where there's a heroine and a hero.  Francesca is obviously the heroine and Calder Hart is positioned as the hero but I don't find him to be one.  He's selfish, cruel, insanely jealous, violent, and in full of anger and guilt.  About the only positives are his richness, singleness, and recognition of the heroine as too good for him (too true!)  In fact the worst part of her, in my opinion, was her unfailing belief in him; every time she thought about how much she loved him and how she believe in him made me categorize her as an idiot.  I hated that Calder commissioned a nude portrait of her even before their engagement (is that historically probable? no one knew that it was nude except for those two, the painter, and then more as the tidbit leaks out), I hated his cruelty when she shows up bruised and with a tattered dress after the missed wedding, and I hated his bitterness.  The man I like for hero is Rick Bragg, Calder's half-brother (this is were jealousy and Hart's self-martyrdom comes in) who is unhappily married but who also knows that Francesca is too good for Calder.  Alas the ending! SPOILER: Francesca marries Calder thus spoiling a satisfying HEA and leaving me greatly displeased.  Perhaps if I'd read the previous books I'd be more sympathetic but other reviews haven't like Calder's behavior either so probably not.

Overall: I mostly like the characters but Calder's general suckiness spoiled the book for me.

Read for Ebook challenge
Posted by The Insouciant Sophisticate at 12:01 AM