The Ruby in the Smoke 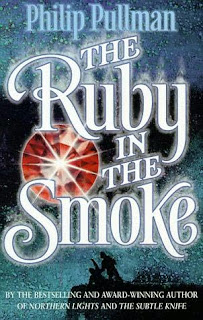 The Ruby in the Smoke by Philip Pullman
Laurel-Leaf, 1985
230 pages
YA; Mystery; Historical
First in Series
3.5/5 stars

Why Read: Forever Young Adult and I saw that JJ Feild (aka Mr Tilney) was in an adaptation.

I really expected to love this book.  Sally is not a typical nineteenth century lady, knowing not how to sew, read, or entertain visitors but quite proficient in shooting and bookkeeping.  She is used to having her own independence, which is useful as her father dies at the beginning of the book leaving her an orphan.

Unfortunately her father's death as part of a sunk ship in his trading business also opens a long secret mystery involving opium, Asia, and a ruby.  Sally sets out to unravel the mystery, acquiring an enemy and allies.  The enemy is a woman named Mrs. Holland who has set her plan in motion and is a most determined and frightening foe.

The allies are delightful fun.  First is Frederick Garland, a brilliant photographer but hopeless businessman who thus appreciates Sally's talents in that area (as well as admiring her person).  His actress sister Rosa and assistant Trembler complete their bohemian household.  Another ally is Jim, a delivery boy at her father's firm, with a big heart and even bigger ambitions.  The group joins together to help Sally find the ruby and to protect her against the evil machinations of Mrs. Holland.

While I appreciated the brevity of Pullman (I believe some authors would have stuffed this with never-ending subplots to make the story much longer), something was missing.  Perhaps I would have preferred a more historically correct heroine-it is acknowledged that Sally is vastly different from the typical lady.  Perhaps I just don't like his writing style (I read The Golden Compass but didn't like it much).  Perhaps my expectations were too high.

Regardless, I am still considering reading the second book and I will definitely watch the adaptation to see Mr. Feild.

Cover: This isn't my cover but I thought that it was prettier. I love the font and the sparkling ruby.
Posted by The Insouciant Sophisticate at 12:01 AM