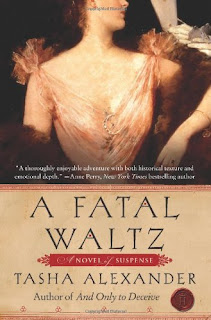 See my reviews of And Only to Deceive and A Poisoned Season.

I've never found the Lady Emily series to have excellent mysteries however I've enjoyed the historical and romantic elements; this book continues that trend.  While I was emotionally invested in the mystery being unraveled, I did not think much of it.  Lord Fortescue, the most powerful man in Queen Victoria's government is found shot and Robert Brandon, husband to Lady Emily's best friend, is accused of the crime.  I like Robert; There is plenty of menace, probably the most that's appeared in the novels yet with a man called Mr. Harrison, deeply involved in the government and immensely threatening to Emily.  I also think this book has the most deaths so far.

The historical elements were my favorite part as Emily travels to Vienna, meeting Empress Elisabeth or Sisi, grieving over the death of her son Rudolf in the Mayerling Incident.  Additionally tensions are growing in Europe, tensions that will eventually explode in to World War I twenty years later.  Besides the political atmosphere, Emily spends a lot of time in the apparently thriving coffee shop scene of Vienna and meets the artist Gustav Klimt.

The romance between Emily and her fiance Colin continues to sizzle but with the complication of a former lover of his, Kristiana, who desires Colin no matter his engagement or her own marriage.  She makes Emily feel young and naive.  While I understand Emily's jealousy, I thought she dwelt on it to much and I wanted her to trust Colin and move forward with her life.

Overall: Another enjoyable outing with Lady Emily; do not read for an outstanding mystery puzzle.

Cover: I don't like that dress although I sort of like the color and I like the separation of title and picture.
Posted by The Insouciant Sophisticate at 12:01 AM