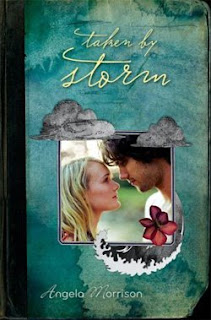 Taken by Storm by Angela Morrison

Razorbill, 2009
291 pages
YA; Contemporary
Summary: Michael is devastated after the death of his parents in a hurricane which somehow he survived. He is sent to live with his grandmother in a small town in Washington where he meets Leecie, Mormon Ice Queen. They are drawn to each other but face conflicts due to her religious beliefs and his depression from his parents' death.
Thoughts: The first thing I read in this book was a poem, which terrified me that this book might be in verse. I've read books like that before but it's not my favorite way. Instead it's told through a combination of poems, journaling and online chatting. The poems are written by Leecie and I don't think much of them-they're very obvious.
I alternated between disliking Michael and disliking Leecie. As they draw closer together, Michael is a stereotypical stupid boy who can't differentiate between physical and emotional intimacy and love. And he complains a lot about how she won't sleep him and thus that means she doesn't love him. Idiot! Leecie is annoying with her believing that she is the only thing that can save him (does Leecie consider herself a Christian? Cos that makes me even more angry) and her planning to give up all of her dreams in order to be with him.
I also hated her school-what is wrong with Leecie's classmates? They pick on her because she's "frigid." Is everyone else at that school having sex? What kind of high school is it?! Mine was nothing like that.
I guess I liked Gran and Leecie's parents although they are not used very much. I liked Michael's name. It was an easy read and I liked the ending although I don't want to spoil it for you.
Overall: 3/5. I thought I would be writing a much more positive review of this but it turns out I liked it less than I thought. I really disliked the main characteristic of each of the main characters (Michael is a pig who only wants sex; Leecie is an idiot who wants to give up her dreams for him).
Posted by The Insouciant Sophisticate at 12:01 AM