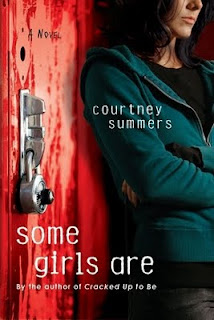 Some Girls Are by Courtney Summers

St. Martin's Press, 2009
246 pages
YA; Contemporary
This ended up being my 100th book that I finished this year-yay me!
Summary: Regina used to have everything until one night when her best friend's boyfriend tries to rape her and gossip turns it into consensual. That best friend is queen bee and plans to destroy her.
Thoughts: What an appalling story! I'm so thankful for my high school experience, sucky as it was. At least I had friends and nobody picked on me; I'm not even sure we had a mean girl hierarchy. The other thing I didn't like is the awful adults. I know I have a good relationship with my parents and I know many people aren't as lucky but surely most adults are more perceptive than Regina's parents, the parents of the other kids, and the teachers at the school.
It's a brutal book to read. Every page I was on edge waiting for Anna and another girl Kara to strike. There were only brief respites before the next incident. The "friendship" that these girls are contented with baffles me. Even though they will stab each other in the back, not listen to each other, not trust each other, and ice each other, they still call themselves friends. How does this happen? Why do some people do that?
Regina is not a nice character but I was able to feel for her. Almost everything she has done to her, she had done to someone else so in some ways it's like retribution. She is fortunate enough to make a friend with Michael, a guy who had been tortured by the mean girls before. I liked Michael-that's about all I have to say about him.
Overall: 4/5. While the story has a few problems, I appreciated the style and was caught up in it.
Cover: I do not like the cover; it turned me off and kept me from picking this book up earlier. I do like the color contrast though.
Posted by The Insouciant Sophisticate at 12:01 AM