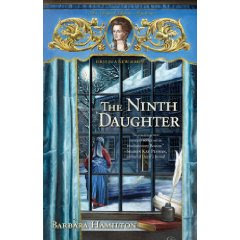 The Ninth Daughter by Barbara Hamilton

Berkeley Publishing Group, 2009
359 pages
Historical; Mystery
1st in series
Source: The library
Summary: In 1773, Abigail Adams finds a dead woman in her friend's house and that friend missing. Then her husband is accused of having committed the crime. So Abigail sets out to discover the real murderer and find her friend again.
Thoughts: I picked this up because I love American history and Abigail Adams is one of my favorite historical figures. I didn't realize it was the first in a series until I got it home; I like to start with the first but for mysteries that isn't always necessary. But it didn't really feel like a first mystery to me because many of the characters (Abigail, John, and Sam Adams, Paul Revere) were already known to me and did not need to be introduced.
My biggest problem was the writing style as there were many times when I had to stop and reread sentences because either the sentence structure or the comma usage confused me. Because of that I'm not entirely sure I could explain all of the details of the murder. I also did not solve the mystery (*surprise*)
Pamela by Samuel Richardson is Abigail's favorite novel (historically accurate?) and its themes about women being used, maltreated, and generally considered unimportant were utilized to make parallels between the novel and the women Abigail sees.
I would have liked a historical note from the author explaining if the murders committed were inspired by a real life incident and also an examination of the Sons of Liberty's activities and the politics of the time. I also would have liked more interaction between Abigail and John because the scenes where they were together were so cute.
Overall: 3.5/5. I will keep in an eye out for other books in the series as I know the first book isn't always as good as the ones that follow.
Cover/Title: I honestly did not understand the title until I typed it today although it is explained.
Posted by The Insouciant Sophisticate at 12:01 AM