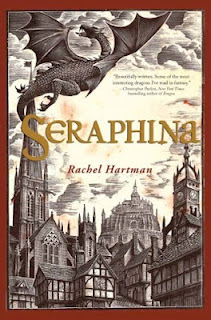 I didn't know much about this book other than that it featured dragons which was reason enough for me to read it. As popular as dragons are, I still have not read much fiction with them. I had also seen several positive reviews of the book, albeit with some cautions about a slow beginning.

So recently I picked the book up and was soon consumed by the world created and especially the characters. I just loved them all so much and I really want to underscore that as I don't always have such a powerful positive reaction to characters. Of course there is main character Seraphina, half-human, half-dragon, who reminded me very strongly of Alanna from Tamora Pierce's series, perhaps because of the deception both must perform to maintain their place at court. Seraphina is not even supposed to exist, living in a country where humans and dragons maintain an uneasy peace. She must keep her dragon parts tightly under wraps even as the two world collide and she possesses a unique mindset to maintain that peace. Because of her covert way of life, Seraphina often lies, trying to maintain the masquerade; although this usually bothers me in a character, I completely understood her reasons and strongly sympathized with her.

After Seraphina, we have her uncle Orma, a dragon secretly masquerading as a human. He has served as her teacher and mentor and serves as our prime insight into the mind of dragons. They're kind of like Vulcans, with an emphasis on logic and pursuit of knowledge while despising human emotions like love, and Orma seriously reminded me of Spock in his careful way of speaking as well as his confusion over the human world. The other major character I have to mention is Prince Lucian Kiggs, who I pictured as Richard Armitage in North and South-sawoon, captain of the Queen's Guard and betrothed to the princess-heir but whose mind is dangerously perceptive to Seraphina's secrets and lies. I realize that of the three characters I mention, I also compared them to others, which I find to be a good thing. They're not exact copies; they just elicit positive comparisons to characters I already love in one way or another.

As for pacing, I can see some people finding parts slow, especially those who generally don't like fantasy. I did struggle with some of the names and new words, being unsure of pronunciation. But I am also comfortable with a slow pace so I can't really comment on that section. I can say that I thought information was doled out at a pretty appropriate pace and I don't have any complaints. It was maybe a bit on the long side but since fantasy has a lot to establish, I am understanding of that.

You may notice that I didn't share much about the plot. That was intentional as I don't want to accidentally reveal any of the many twists and turns. There are so many more great characters I didn't mention as I don't want spoilers and just a lot packed into this book. I am very excited for the next book.

Cover: Not my favorite-I tend to like bold, bright covers that catch the eye. This seems more muted although I'd have to see it in person to really judge properly.