The Scorpions of Zahir 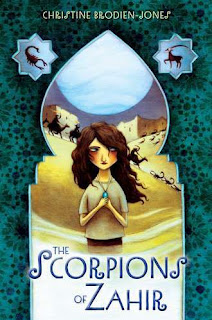 I really love the cover with its vibrant blue/green and the idea of archaeology in Morocco, the primary setting for this book. I didn't know too much about its plot going in to the book and I was okay with that.

Once I started reading though I really struggled to connect with main character, eleven year old adventurer Zagora Pym who aspires to be an explorer just like her father is. I don't know exactly why because on the surface, she is pretty much the kind of character I like. She is spunky, curious, and intelligent. She has ambition and drive that should bring her much success as she ages. But I didn't really like her. Certainly part of that was her habit of taking her father's possessions, hiding them, and then obscuring her actions as well as her generally impetuous nature, which had her diving headfirst into situations without carefully considering the best course to take. But another part is me the reader just not clicking with her.

The other characters are fine. There is her father and older brother whose differences from Zagora actually come in handy and give her a new appreciation for his interests. Then there's the shady Olivia and her cousin the mysteriously reappearing Pitblade. Two characters from the region are their guide Razziq and the imperious Mina who wants to reclaim an artifact for her people. Lastly there are the titular scorpions, who terrified me. Not only are they bigger than the average scorpion, they also seem to be smarter and capable of coordination. Much as they scared me, I did appreciate their importance to the plot.

Overall: Inability to connect with characters combined with slow-moving plot made this an unpleasant read for me. I hope more readers are able to click with Zagora and gave her story its due.

Cover: As mentioned above, I like the cover. Definitely signals middle-grade story as well as capturing the desert setting.