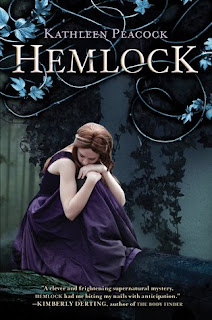 Finally I have had a chance to read this after skimming many reviews and getting a lot of ideas about what this book contains. It sounded like a different kind of werewolf book and the love triangle actually seemed to be a lot more complex with some different dynamics represented.

The basic plot is that werewolves are known and acknowledged in this world; when captured they are tagged and sent off to camps, never to be seen again. However some evade capture such as the mysterious white wolf that killed Amy, best friend to Mac, our main character.  Now Mac is struggling in grief while her town is overtaken by the Trackers, an extremist group dedicated to crushing werewolves. Meanwhile Mac's personal life is spiraling out of control, largely due to the aforementioned love triangle.

Well let's tackle the love triangle first. Both of the guys are long-time friends of Mac. One, Jason, dated her best friend Amy and the other is her best friend Kyle but the two have never contemplated taking their friendship to the next level (according to Mac's narration). Jason spends most of the book being the entitled rich kid, never forced to deal with consequences because his daddy's money and influence spares him from all that. He is a jerk with a lot of rage so it is not too surprising to see him get entangled with the Trackers. Kyle is much more my type, the very sweet guy who is there when you need him. Of course, both are super hot and there are several intimate scenes between Mac and each guy. One of the elements I was prepared for was for Mac to have a more maternal side to each guy, which is true in my opinion. I thought she spent a lot of time looking after and being protective of them, not that they necessarily appreciated it. And thus, while I liked Kyle quite a bit, I ultimately am not a fan of this love triangle. I think Mac needs someone else outside of their weird little group.

Thinking back on the mystery, it all ties together perfectly although I was not able to puzzle it out for myself. It's money, influence, and politics tying together for someone's agenda. Honestly I was too sidetracked by everything Mac was doing to really consider who the wolf could be (thankfully we do find out or I would have been upset).

One of my favorite parts was that Mac keeps imagining Amy in her head and having conversations with her. It didn't seem exactly like a dream but more of a coping mechanism. I always got excited to see Amy's name appear in print during those scenes. This was especially effective in the end when Amy warns Mac that unveiling the white wolf does not end everything; there is more to come, obviously as this is a trilogy.

Overall: I did like the paranormal elements and mystery but the love triangle was a bit too drawn out for my taste and ultimately I root for Mac as a single gal, unencumbered by the stupid boys.

Cover: The girl looks so separate from her surroundings instead of one with the forest. The dress is also extremely impractical for all of the running around Mac does.