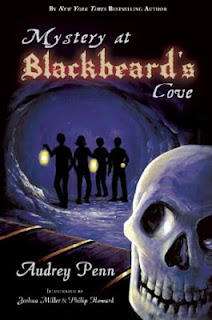 This was an older book I found while poking around on Netgalley and with my deep love for the first Pirates of the Caribbean movie, I decided to request it. The beginning was promising with a pirate raid occurring.

However we then shift to the present and I felt the story slooooow down. There is set up around the widow Mrs. McNemmish who wants to be buried at sea. A group of four children are enlisted to ensure that this last wish is carried out: Billy, Daniel, Mark, and Stefanie.

Now I know I usually love books with my name but a. it's spelled wrong and b. Stefanie was annoying. She whined a lot and never seemed committed to the spirit of adventure like the boys were. Mark didn't speak although he could communicate a lot through facial expressions and gestures and I found the other two boys indistinguishable. So it's safe to say that I didn't click with the characters.

But what about the plot? Although quite a few events are detailed, I felt like this book dragged. It took me ages to read it and I ended up stopping and reading something else more than a few times before buckling down to finish. Why didn't I DNF? Well, I try to give any book I receive for a review a strong chance. By the time, I was considering stopping, I was already pretty far in and I wanted to know what happened, just for curiosity's sake. I will say that I thought the book improved with more excitement near the end. But there was so much that bored me in the beginning that I almost didn't stay for that good stuff.

Overall: I could not connect with the characters and felt the plot dragged for about the first half. While it did pick up, I was never fully immersed in the story.

Cover: I do like the skull-very piratey even though I feel like that aspect wasn't strongly emphasized in this book.