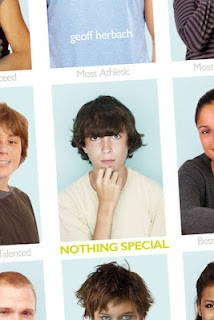 I requested this under the impression that it would be a fun contemporary read. While not wrong, it did miss that this is a sequel to Stupid Fast, a book I have not read. I think that was to my detriment as there were many points in this book where I struggled; I seriously think the background from Stupid Fast would have improved my reading experience.

The reason for that is the many relationships and assumed history that were completely bewildering to me. There's our main character Felton and his mother (who he calls by her first name, making me think she was his stepmother but I think she is his birth-mother), his brother, and their now-deceased father who committed suicide. His shadow hangs over the family especially as the man's athleticism is echoed in Felton's skills. Their family also has messed-up relationships with the parents of the father, something that is explored in this book. Felton has his own personal mind to work out too including feelings of inadequacy as suggested by the title of the book. His journey to rebuild relationships and understand himself forms the bulk of the story.

Family plays a big role but so does friendship with Felton reconnecting with his ex-best friend as well as struggling to maintain a romantic relationship with Aleah, who it seems plays a big role in the first book. She doesn't make an appearance here but she is uppermost in his mind. But as I said before, I was so confused for most of the book. It wasn't until the story had really developed toward the end that I felt somewhat settled in the setting.

Saying all that about the confusion of characters, I did really like the writing especially since it was written in letter-format (I am a sucker for epistolary novels). The humor is enjoyable and those who are looking for a male protagonist should enjoy Felton's compelling voice.

Overall: Definitely not a standalone. But if you liked the contemporary of Stupid Fast, you should enjoy the further life experiences of Felton Reinstein.

Cover: I really like the cover; as a yearbook setting, it evokes the entire experience of being in school and looking back and thinking about how you'll be remembered.