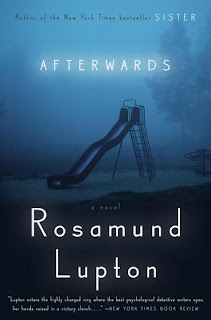 I read Lupton's Sister because I am a big fan of sister stories but I wasn't as interested in this one since I saw it did not have sisters at the heart of it. But when I had the chance to review a copy through Amazon Vine, I accepted it with interest.

Although it's been a while since I read Sister, I thought the writing style was pretty comparable and indicates that Lupton has her own distinctive voice that should serve her well as she continues to write. The story for this one also has a mystery: who started the fire at a school that led to Grace and her daughter Jenny being badly injured? And while they are having out of body experiences now, will they survive? It might be a bit hard to wrap your head around the fact that Grace and Jenny's souls are moving around but I've read weird premises so I was able to just go with it. I thought it was pretty cool actually. But my favorite part was definitely trying to unravel the mystery as several stories come together and then need to be taken apart to get to the truth.

However there were a some aspects I really didn't like. First is the jarring use of second-person perspective. Grace uses "you" to talk to her husband but I kept feeling like she was trying to talk to the reader so I would get confused about who was doing and saying what. I think second-person is very difficult to incorporate into a novel and I don't think this one was very well-done. When the culprit is eventually revealed, I confess I was a bit confused. I think part of that stems back to the use of second-person narration. And in-between the mystery parts, there were Grace's musings on motherhood, family relations, and the relationship between mother/daughter especially. I didn't always agree with her, particularly about the last one so the fact that she treated those statements as universal didn't seat well with me.

Overall: I think the second-person narration makes this a more divisive book than Sister but recommended to fans of more literary fiction as well as Lupton fans who will want to see this author develop her writing.

Cover: I like the slide on a playground as there is an incident that is important but I think I would have liked to see a cover with the school on fire, just for comparison.