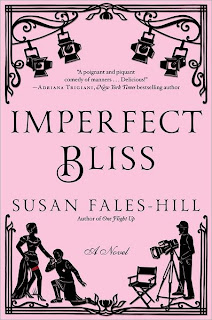 This was an automatic want-to-read after seeing that it was inspired by Austen's Pride and Prejudice, my very favorite book. I am always curious to see how an author will update the specific settings, characters, and plots from Austen's time to fit into our time.

In this case, we have a Jamaican-born mother whose childhood under the British empire inculcated her into certain ideas about status and class; this has been something she has tried to impress upon her four daughters, who were all named for British royalty: from eldest Victoria, next born Elizabeth (aka Bliss, our narrator), Diana, and Charlotte. She herself married a British man but alas a lowly professor without the income to keep them in the style she'd like. Bliss is her mother's disappointment, having married a poor Latin man, divorcing him when she discovered his adultery, and returning to live at home with their daughter while earning her PhD in history. Meanwhile Victoria is possibly on the verge of an unenthusiastic engagement to a very suitable man and high-schooler Charlotte is sneaking out at night for impure activities. Diana is the pride, having been selected to appear on a reality show called The Virgin, as the titular virgin who chooses a man and will marry him on television. This is her chance to snag a wealthy and hopefully titled man while also earning fame that will reflect onto her family.

Of course as I read, I was making comparisons to the original text. I thought the parents were especially well-done with the grasping mother and the distant father who has basically written off his two youngest. Diana and Charlotte as fame-seeking young women akin to Kitty and Lydia are also well-done. I also liked the stand-ins for Darcy and Wickham, with the Darcy guy in particular having some swoonworthy actions (he's so good to Bliss' daughter!) However I thought Bliss, while possessing an enjoyable sly sense of humor, cannot quite live up to my beloved Lizzy Bennet.

I did end up with two sizable problems. First, I didn't think enough time was spent on the romance. Bliss comes a lot closer to being with her Wickham and I felt their romance received more page-time than the real one. The ending with Bliss and her Darcy together felt rather rushed and abrupt. Second sometimes I thought the author was trying to speak against a society that condemns women for the clothing they wear and the fact that they might enjoy sex. But then there would be language agreeing with that point of view and a lot of use of the word "slut" used by both sympathetic and unsympathetic characters. It made me uncomfortable.

One last thing, I also had a very dumb moment about a third of the way through when I realized the book title comes from the main character. Her name is Bliss and she is imperfect! Um, that's something I should have realized right off but instead it took me quite a while...

Overall: A fun modern updating on Pride and Prejudice; I especially loved the exploration of the Mrs. Bennet character and her relationships with her daughters.

Cover: Love the pink and the artwork does remind me of some covers of Austen books that I've seen while also incorporating the modern elements of reality television.