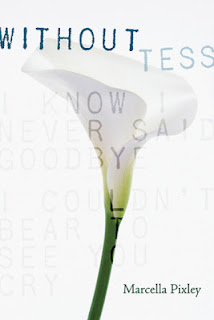 One of the themes or plotlines that most preoccupies me in literature is that covering the relationship between sisters. This comes from my own actual life where I have a younger sister. I do not usually anticipate reading books where the sister-sister relationship is as functional as ours (because it isn't very dramatic) but then I don't usually expect a relationship as dysfunctional as the one covered in Without Tess.

Our narrator is Lizzie, a young girl faltering in high school, still mourning the loss of her older sister, the titular Tess. She has no friends, no ambitions, and clutches Tess' journal as her safety. Through the listening help of Dr. Kaplan, Lizzie begins to realize the mental state of Tess and release herself from crippling feelings of guilt over her complicity in her sister's death.

I felt so much pain reading about Tess, her imaginative fancies, and the way she brought Lizzie in to them. I understand that Tess had mental problems and that their parents were completely ineffectual in getting her the support she needed. But as an outsider, I just wanted to reach in and protect Lizzie. She constantly put herself at risk and alienated others in order to stay in the good graces of her temperamental sister. As it says on the book jacket, "...she did everything her sister asked her to do, even if it meant putting herself in danger." It's absolutely heartbreaking and one of the saddest sister stories I've read. There are the fun times that bind them as sisters but they are far outweighed by Tess' mental illness.

One last element to mention is the writing, which is beautifully lush and did an excellent job capturing Tess' poetic side, the way she could throw out a phrase or sentence to entice Lizzie. However that is not the kind of writing that I really like and I sometimes felt overwhelmed by the writing. It was pretty and character-based where I tend to like a little bit more action. As might be expected, there are a lot of flashbacks in the book to trace the development of the relationship between the sisters; sometimes this can be confusing but in general, I thought it was very clear when events were happening.

Overall: Beautiful poetic writing and a storyline that just made me want to go hug my sister and tell her how much I love her.

Cover: A fitting sparseness for the way Lizzie's life feels.