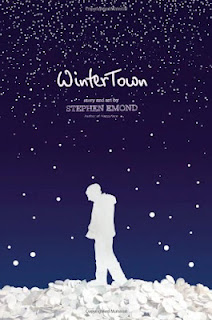 I'm not sure it's entirely accurate to call this a graphic novel as the majority of the book is told through words. However there are excerpts from the comic created by the two main characters that play a significant role in the narrative (and were personally my favorite part) so I decided to include that above in my categorizing.

I picked this up because I remember seeing posts about it at the end of last year but then I feel it kind of got lost in the holiday busyness as well as anticipation for the many awesome 2012 releases. So when I was looking for a contemporary read at my library, this caught my fancy.

I had an incredibly difficult time getting started, putting this book down several times to pursue other reading material and only finishing it the day before it was due back at the library. I can't quite put my finger on what the problem was. Evan is normally the kind of character I like to read about (and can easily identify with): straight-A student, kind of nerdy, tight-knit family, "normal." But I just didn't click with him or his struggles to reconnect with his best friend Lucy who only comes to visit for about two weeks over winter break.

However about halfway through the narration shifts from third-person focus on Evan to third-person focus on Lucy and I found myself much more intrigued. I don't know if this is me generally being better able to identify with female narrators or if after so much of Evan's speculation about Lucy's state of mind, I was thrilled to get to hear about it straight from the source. Her section opens with exactly what has been preoccupying Lucy during the previous chapters, many unpleasant events that threaten their fragile relationship.

I can't say I was a big fan of the ending as I found it a bit ambiguous if optimistic for my taste. I would have liked something more concrete, cementing that final scene for the future. Spoilers avoided for general audience but if you've read this, hopefully it makes sense to you.

As I said above, my favorite part was the inclusion of a comic drawn and written by Evan and inspired by Lucy and his' childhood imaginations. We get a little taste in-between chapters but I wanted more!

Overall: I feel like the book blurbs make this seem like more of a romance whereas it felt more like a coming of age book that just happened to involve some romantic feelings as happens. If it's going to be billed as a romance, then it really needs to be a romance for me.

Cover: Cool-with the role of paper, it is fitting that the "snow" at the bottom is composed of the paper punched out by a hole puncher.