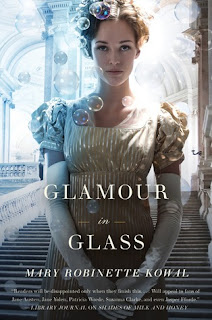 Source: Picked up from library for review.

Not too long ago I read Shades of Milk and Honey and enjoyed its very Jane Austen-esque plot points along with the addition of magic in the form of glamours. That book concluded with the marriage of heroine Jane to a professional glamourist David Vincent. This sequel promised to expand the magic and test the young marriage, both of which turned out to be true.

The book opens with a high point-Jane and Vincent have worked together to create for the Prince Regent, lifting their profile immeasurably. Furthermore the monstrous Napoleon has been exiled to Elba allowing the pair to journey to Belgium for both professional and personal enjoyment. However no sooner have they arrived then Jane receives news that threatens her future using glamour, Vincent draws away leaving Jane to fear he does not care for her, and Napoleon escapes his prison and rallies his troops as they march on Belgium.

I had mixed feelings about the plot. I was happy that the author drew away from the very over Austen overtones from the first book, which allows her more leeway for future stories, but I was also sad because I love Austen and I want more than six completed novels. But it is mostly for the good as that means this reader got more surprises. There is even more information about the magic and of course politics and war. Napoleon is supposed to be confined to Elba but he still has a lot of support casting a pall over much of the cheeriness.

While I liked a lot, I have to say I didn't think this book was perfect. As Vincent draws away, we don't get nearly enough of him in the book. I love their partnership and was looking forward to more of that. The reason why Vincent pulls away makes sense and is somewhat rectified within the course of the novel but I still want more. The other is the grand climax with Jane doing some extraordinary things that left me a bit skeptical. I think she is very smart and could have come up with such a plan but I just don't know about implementing every element as it actually played out. I'd love to hear your thoughts if you've read this book.

Overall: Another enchanting story with the bold and brave Jane Vincent; excited for the third book, which looks like it will be drawing on Emma-I can definitely see Jane as a meddling matchmaker!

Cover: Very pretty-I love the dress although this lady is much prettier than Jane thinks herself to be.