Review: A Farewell to Charms by Lindsey Leavitt 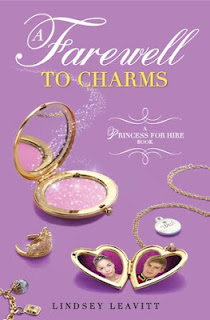 A Farewell to Charms by Lindsey Leavitt
4.5/5 stars
Hyperion, 2012
279 pages
Middle-Grade Fantastical
Book 3 in the Princess for Hire trilogy

Source: Received a copy from publisher as support for blog tour.

**Spoilers for the earlier books**

After loving Princess for Hire and The Royal Treatment, I was eagerly anticipating this conclusion to the trilogy. The previous book ended with suspense as Desi confirmed her suspicions that Reed was also a sub in the male branch of Facade.

Through her discussions with Reed and her relationship with her agent Meredith, the world of Facade is vastly expanded. We see more of the other agents and managing staff as well as more about the ultimate designs and purposes. This potentially has some negative outcomes that Desi is determined to thwart while also balancing her new responsibilities as a Level 3 sub. Desi will stop at nothing to uncover and proclaim the truth.

Meanwhile Desi's home life is getting more and more complicated. Her feelings toward Reed are in turmoil, she's fighting with her best friend, and her mother is all of a sudden awfully tired. The former was a bit tiresome but he's really only Desi's second crush and she needs some help negotiating that. It is sometimes hard to remember how old Desi really is because she takes on so much responsibility and is mature beyond her years. Meanwhile the situation with her friend was so rough to read; all Desi wants is to confide but she can't without betraying the confidentiality of Facade. The family storyline is really sweet although it fades a bit in comparison to the other plots.

Unfortunately in the end I wanted a little bit more of Desi using her empathy as a sub instead of investigating the machinations of Facade. I know how the series has been building toward that and if there hadn't been anything about it, I probably would have complained. Still I missed Desi subbing as much. I promise though that there are several satisfying episodes with Desi subbing-they were some of my favorite parts.

Overall: A satisfying conclusion to this princess trilogy-sure to please fans of the previous books. Desi is a great heroine and well worth reading about.

Cover: I love these covers so much! They provide the perfect opening to what these books are like.

Want to read this (or any of the books)? I'm hosting a giveaway of your choice of one of the books in the series. Open internationally!

Posted by The Insouciant Sophisticate at 11:59 AM