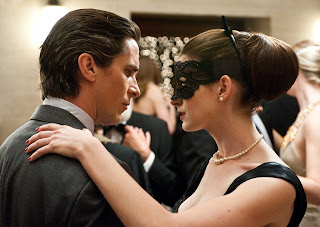 Like many people, I eagerly went out to see Christopher Nolan's conclusion to his Batman trilogy, The Dark Knight Rises. Sadly this movie has become part of a tragedy with that gunman killing appearing at a midnight showing in Colorado. My deepest sympathies are with the survivors and family members as they mourn their losses.

Going in to the film, I had some worries. I wasn't sure I would be able to understand the villain Bane's speaking voice with the mask over his mouth. I was terrified of the long running time (2 hours, 45 minutes). And I was wondering if this could possibly top The Dark Knight, a tremendously amazing picture that only keeps improving, the more I watch it.

Of those three concerns, the first one was eased early on. I thought Bane was very clear and easy to understand-this comes from someone who always puts subtitles on if they're available because I often need a little help. In my theater, he sounded a little louder than the other characters and I was able to understand almost everything he said (there were some trouble spots at the end).

I did think the movie was a tad on the long side. I was fully absorbed in the film (unlike, say, Avatar where I fell asleep) except for some stretches in the middle. The climatic scenes were excellent and I loved the ending although there was some ambiguity (highlight to read spoiler: I would have liked to see JGL as Robin and then to step up in to the Batman role. I loved loved loved Alfred seeing Selina and Bruce at the end though :)

However at the moment I still prefer The Dark Knight with its more charismatic villain and what felt like a tighter plot. Saying that I did not like the film very much after my first viewing, feeling overwhelmed by the darkness. It is entirely possible that this will become my favorite of the trilogy due to my favorite character.

As you might guess from the picture, my very favorite character was Anne Hathaway's Selina Kyle (Catwoman). In my opinion, every time she appeared, the movie pepped up from her energy. She's slinky with some killer black dresses, red lips, and crazy long legs (seriously impressive legs-I'm totally using them as inspiration for my exercise regime). Her hair was never mussed and she remained poised in every situation. I love Michelle Pfeiffer's Catwoman so I'm not comfortable saying that either is my favorite but I'm fine saying they are tied.

Did you see The Dark Knight Rises this weekend? What did you think?