Something Strange and Deadly 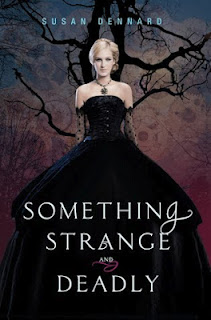 Something Strange and Deadly by Susan Dennard
4/5 stars
HarperTeen, 2012
388 pages
YA Historical Zombies

Source: Received for review from Amazon Vine in exchange for an honest review.

I think the thing that most people would get out of reading the Goodreads synopsis of this book is "zombies" but I latched onto 1876 Philadelphia, which in our history is the centennial of the Declaration of Independence. As a history nerd, this is something that made me very interested. But none of the reviews I had seen mentioned it. The other thing I anticipated when going in to this book was to be reminded of Dearly, Departed, which also incorporates historical manners and dress with zombies (and which I liked a lot).

Well the centennial does play a part as the Centennial Exhibition attracts national attention, prompting local politicians to try to downplay the zombie threat and hindering the chances of actually stopping the zombies.  This is also where Eleanor meets the Spirit-Hunters, a trio charged with the responsibility of stopping the Dead with very limited resources. I would have liked more about the city during this exciting time though!

As for the story itself, I thought it was somewhat lackluster. There are two main mysteries: where is Eleanor's brother and how to stop the Necromancer menacing the city with the Dead. I fairly quickly solved them as the clues were unsubtly doled out. And I am not someone who is usually able to pinpoint the murderer or anything like that. There were just a limited number of characters introduced so it had to be *that* one and it was. I grew frustrated with Eleanor's slowness to put the pieces together because it seemed very obvious to me.

But I still gave this 4 stars, a pretty high rating. Why? Well, I did like Eleanor and her fighting against being forced into marriage to save her family from financial ruin while her mother continues to spend as if there are no worries in that arena. I identified with her worry over her brother and what he might be caught up in. And I liked her love interest, dreamy Daniel from the Spirit-Hunters (who is not one of the Dead, thankfully; I do not like zombie/human romances).

Overall: A promising debut that needs to kick it up a notch for the second book.

Cover: I like the details in her gloves, jewelry, and what I can see in her hair but it doesn't really pop for me.