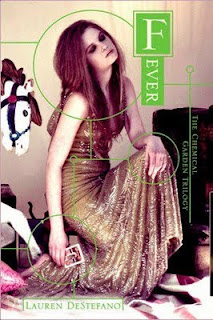 I loved the cover for first book Wither. Seriously, I talked about it a lot. I didn't love the story within quite as much but I was still eager to know what came next for Rhine and Gabriel as they broke out of the compound.

However I realized fairly quickly that I did prefer the setting at the mansion where Rhine was confined with her father-in-law Vaughn, her forced husband Linden, and her sister wives. I don't really like stories where they're constantly on the run, away from something, in this case the threatening Vaughn who will never let Rhine permanently out of his clutches (Note: I do like quest novels where they're going toward something). However they do have a goal of reaching New York so that Rhine can search for her twin brother Rowan.

I don't want to share too much about this plot but I would say that I would break the book down into four parts: the carnival brothel (or as April humorously called it Cirque du Brothel), extended period journeying on the road, arrival in New York and settling down in an orphange, and finally Rhine returns to the basement of the mansion so that Vaughn can continue his experiments on her. For me, the book increased in interest the more I read with me vastly preferring the concluding location, which was haunting and gripping with Rhine on the brink of madness and almost always in pain. Then there was the ending, the last word in fact, which ensured that I will be returning. I was fearful as the pair fled but the menace increased one-hundredfold once Vaughn was a constant presence. We never knew when he would return to try out some other drug on Rhine and the days pass fitfully. It was great!

That is not to say that there weren't great moments throughout. There were some amazing descriptions with color and touch, for example.  At some times, I felt the focus was more on the writing rather than the characters or plot which accounted for a bit of a lag. For people who like that though, this should be an amazing read.

Overall: Honestly I was neutral about reading this second book and only grabbed it because it happened to be on my library's shelf. Now that I am done, I am very glad I did because this was a roller-coaster ride for me and I am eager to complete the trilogy.

Cover: Part of the reason I took so long to read this book was that I found the cover less attractive than Wither. I *love* that purple and still enjoy looking at the cover. This one is kind of busy although if Rhine is holding a tarot card, that is relevant to the plot.