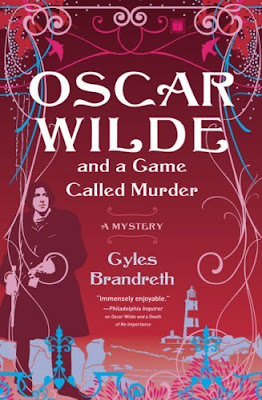 Oscar Wilde and a Game Called Murder by Gyles Brandreth

Summary: Oscar Wilde gathers a group of friends for a nice meal, that ends with a game where each chooses someone they want to murder. That same night the first of the victims dies and each night after, they die. Unfortunately Oscar is the 13th victim and his wife is the 14th. Can he find the murderer in order to save their lives?

This is a mystery featuring Oscar Wilde as a detective told from the perspective of Robert Sherard, his friend and first biographer. It is the second in the series but I didn't read the first and I don't think it's necessary to read them in order. It would be helpful to be interested in the fascinating personality that is Oscar Wilde and this book also has appearances from Arthur Conan Doyle and Bram Stoker.

It's quite a funny book utilizing, I'm sure, many of Wilde's famous sayings (I'm not entirely familiar with all of his work but I imagine some of it is). I was slightly perturbed by the depiction of Wilde as quite a Sherlock Holmes, both with his deductions and personality, and seeming almost to inspire the character as Conan Doyle is far less observant. I also found it heartbreaking to watch the mostly pleasant home life of Oscar and his family, knowing what will come in 1895 (The book is set in 1893.)

Again I did not quite figure out the murderer but I did make some important deductions that brought me closer than I usually am to figuring out the mystery. But I will definitely keep an eye out for the other books in the series.

Overall: 4/5 for a fun book but not entirely gripping (it took me about three days to read because I didn't care that much about finding out who the murderer was).
Posted by The Insouciant Sophisticate at 12:01 AM