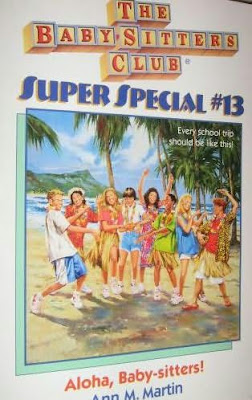 Sorry for the bad pictures-I'm very excited to be talking about the BSC which were my favorite books from probably first through fifth grade. I am also supremely grateful to my mom who is storing books 1-90, maybe ten of the later books, some mysteries, and the super specials. My collection had been missing 9 and 13, but I have now fixed that.

The Super Specials are super because they are told from the POV of each baby-sitter and usually a few other characters and are thus longer than the regular books. They also usually involve trips to fun places.

Super Special #9 is unusual in that everyone stays in Stoneybrook in order to participate in a local production of Peter Pan. Besides the baby-sitters, Mary Anne's boyfriend Logan, walking disaster Jackie Rodowsky, and arch enemy Cokie Mason contribute to the chapters.

Super Special #13 is a class trip to Hawaii although Kristy and Mallory are unable to come. Logan again contributes as does Stacey's boyfriend Robert. Dawn is shoehorned in as she is visiting Stoneybrook for the summer during her break from school in California.

In general the characters are rather whiny (especially Jessi in #9 when she doesn't get the role she wanted) and sometimes they act far older than 11/13, IMO. I also like that the Super Specials don't really focus on the kids or baby-sitting. I realize that goes against the whole point of the series but when I was little I liked seeing the "exciting" lives of older kids and even now I have more of an attachment to the sitters who are in (almost) every book and less for the kids who vary book to book. Additionally Karen is incredibly annoying.

Email ThisBlogThis!Share to TwitterShare to FacebookShare to Pinterest
Labels: book, own