The Forest of Hands and Teeth 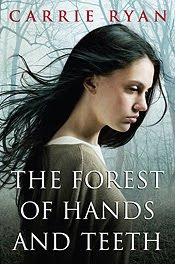 The Forest of Hands and Teeth by Carrie Ryan

Summary from amazon.com: Mary knows little about the past and why the world now contains two types of people: those in her village and the undead outside the fence, who prey upon the flesh of the living. The Sisters protect their village and provide for the continuance of the human race. After her mother is bitten and joins the Unconsecrated, Mary is sent to the Sisters to be prepared for marriage to her friend Harry. But then the fences are breached and the life she has known is gone forever. Mary; Harry; Travis, whom Mary loves but who is betrothed to her best friend; her brother and his wife; and an orphaned boy set out into the unknown to search for safety, answers to their questions, and a reason to go on living.

I didn't really like Mary-she's pretty selfish and boring. I was interested in her desire to see the oceans. After the Return, everyone was confined to the village and never could see anything outside so the idea of an ocean could be very compelling. She was interested in Travis although I could never tell why-it seemed to be more of a physical thing.

Throughout there are many questions, a few of which are answered but most are left unresolved, presumably to be answered in the sequel coming out next year. I don't know yet if I'll want to read it; I may just look for spoilers online. It seems like Mary is something special as she is able to fight off the zombies especially well even without the training of her male peers. The Sisters and Guardians are the religious and military figures of the village and there are still mysteries revolving around them which will hopefully be explored more.

Overall: I have to say that I've never been very interested in zombies, vampires, werewolves, faeries, etc; basically the only supernatural stuff I like is wizards/sorcerers so that may influence my opinion. If you are interested in apocalyptic stuff/zombies, you'll probably enjoy this, but I have to go with a 3.5/5.

Tomorrow: Christmas special!
Posted by The Insouciant Sophisticate at 12:01 AM