A Day No Pigs Would Die 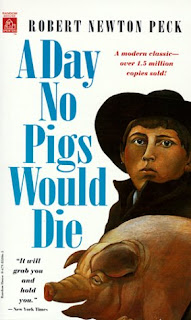 A Day No Pigs Would Die by Robert Newton Peck

[There be spoilers ahead!]

I chose this because I had seen it on the banned/challenged books list and I could see that it was short (do you see a theme here?) Apparently it was challenged for its depiction of pigs mating and being slaughtered. And that is gross! There are also descriptions of a hawk killing a rabbit, squirrel hunting, and a dog killing a weasel and then having to be put down. So there is a lot of icky stuff at least to this suburban girl. While it was violent, it wasn't for the sake of violence; the latter especially provided a lesson. What really got me was the death of his father--tears just streaming down my face and I was reading it at the library although I don't think anyone noticed (thankfully).

Anyway this is a mostly sweet coming of age story which seems to have been partly based on the author's own experiences as the main character is named Robert Peck. They're Shakers in Vermont, scratching out a living on a farm while his father also slaughters pigs to supplement their income. The main character is a twelve year old boy who receives a piglet from his neighbor as a thank you for helping to birth his cow. It details how he helps the pig grow and then has to help his father kill her when she is barren. Then his father dies and the boy (who's only 13!) has to step up as the man and run the farm. All of the experiences listed earlier and more contribute to his growth into manhood although I felt very protective over him and wished he could have had a bit more time to grow.

Quotes
Funny: "If you didn't come up, you got dead and your mortal soul went to Hell. But if you did come up, it was even worse. You had to be a Baptist." [60]
Good Advice: "Never miss a chance to keep your mouth shut." [92]

Rating: 4.5/5 for a fast, heart wrenching and heartwarming story. Highly recommend.
Posted by The Insouciant Sophisticate at 6:01 AM