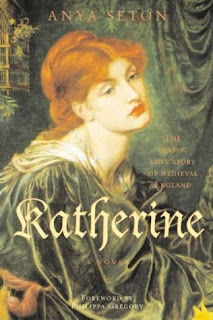 This is a historical novel about the romance of Katherine Swynford and John of Gaunt, Duke of Lancaster whose descendants became are represented in most of Europe's royal families, fulfilling Merlin's ancient prophecy "thou shalt get kings though thou be none!" Queen Elizabeth II is one of those descendants.

The novel begins with Katherine about 15 and coming to court in hopes of finding a husband. She basically falls in love at first sight with the Duke of Lancaster, who is married to the lovely (and rich!) Blanche. She ends up married far beyond expectation to the knight Hugh Swynford. She bears him two children and then he dies. Almost immediately she and John begin an affair, even on the eve of his betrothal to the Infanta Constance of Castile. She ends up bearing him four children, causing a myriad of problems. Eventually her guilt and the scorn of her firstborn cause her to renounce John. However once his wife dies, he returns to her and proposes marriage, which ends with the legitimation of their children and happiness.

Thoughts:
Rating: 4/5 It was good and I would definitely recommend it to people who like historical novels, romances, and/or this time period. But I felt it was a bit long and lacking in the beginning of their romance.
Posted by The Insouciant Sophisticate at 2:14 AM