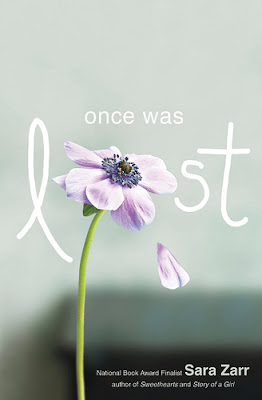 Once Was Lost by Sara Zarr

Summary: Samara is a preacher's kid whose mother is in rehab and whose father is available to help everyone but her. When a teenage member of the congregation is kidnapped, Sam is confronted by her doubts about God, her family, and herself.

I thought this was an interesting concept and I like to read YA books that deal with faith as that doesn't seem to show up very often. This does lead to long passages with Sam just thinking and sometimes those were boring. I identified with some of her thinking about families (such as having a sibling helps because you have someone who understands the weirdness of your family-she's an only child but I'm not so I totally got this; how "losing" one member of the family throws things out of whack-her mom's in rehab and will come back but for now is lost).

The feelings of just wanting to be left alone and wanting to have an honest conversation with your parents are also eloquently expressed. I imagine most teenagers could identify with those feelings as well as her uncertainties about self.

Overall: 4/5 for a solid story although not as gripping as other books I've read
Posted by The Insouciant Sophisticate at 12:01 AM