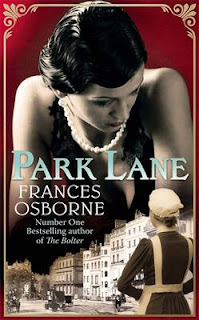 I was very excited about this book since the publisher blurb compared it to Downton Abbey, a beloved TV series for me. However that excitement was dampened when I glanced at the goodreads reviews beforehand and saw that they were decidedly negative.

First this book was very difficult to get into. It begins in 1914 and goes to 1923 for an epilogue, alternating between Grace, a maid, and Bea, the young lady of the house. Grace is just settling in to her new position and the writing style, instead of smooth and inviting, was ragged and rough. There were a lot of passages where I was kind of confused about what was happening or what the relationship between the characters was. I don't want everything to be spelled out for me but I would have appreciated more smoothness and clarity.

Second it presumes a certain level of familiarity with British history with the battle for women's suffrage playing a huge role in the early chapters. One of the main characters Bea has a mother and an aunt (her father's sister) on opposing sides of the battle. But not because one opposes giving women the vote. In fact, both are in favor but the aunt prefers more radical actions while the mother is more conservative, trying to patiently push it through her Parliament connections. This was *so* confusingly presented and not explained until the Historical Note at the end.

And third this book was overall very depressing. Grace is in service as her dreams of being a secretary were dashed and lowered her earning potential. Then Bea was jilted by her love and seems on the brink of spinsterhood. Add in more ruined relationships and the tragedy of WWI and this is just not a happy book. I can handle sad books of course but I guess I was hoping for more of the happiness that balances out Downton Abbey. It is not present here and quite frankly I only finished this book through pure doggedness.

Cover: I find the cover misleading-if the insides were as cool as the cover, this book would have been more my taste.