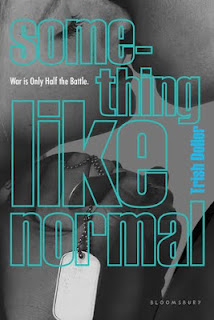 Something Like Normal by Trish Doller
3.5/5 stars
Blomsbury, 2012
214 pages
YA Contemporary

I requested this book because I haven't read (or even seen) many YA books focusing on soldiers who have served in Iraq and Afghanistan. Although I figured it would be an intense read and I'm more of a light reads girl, I also thought it would be worth it.

Well, I was certainly right that the parts dealing with main character Travis's military service would be great. Travis joined, not with a fervent desire to serve his country nor with a deep commitment for military work but more as an escape from his overbearing father and purposeless life. But he found a place where he survived and bonded with a group. As he returns home for a leave, he is processing the death of his best friend Charlie and preparing for a memorial service in honor of the man. There are flashbacks to Travis's experience and he suffers nightmares as one might expect. These sections were strong and engrossing for me.

What I didn't exactly like was all the time spent on relationships. First because I was expecting more about the military and second because there were some seriously messed-up relationships. Travis has very poor relationships with his overbearing father and jerky brother, both of which are touched on but not to the depth I would have liked. His relationship with his mother is also a little fractured but that receives more treatment.

Then there is Travis's romantic life with his ex-hookup Paige who is now with his brother and this one is seriously gross since she slips into his room with the brother just down the hall (repeatedly). Meanwhile there is Harper, whose reputation was ruined by Travis in eighth grade and who he constantly treats badly but who still hangs around him. So he's hooking up with Paige for lack of anything better while also pursuing Harper-dislike! I mean, I really liked Harper and I just wanted her to do better than Travis. Thankfully by the end of the book, he seems to have straightened out some and is on the way to (maybe) being worthy of her. Admittedly the cover does seem to hint more at this being a romancey book but lots of books have inaccurate covers so that doesn't necessarily mean much.

Warning: Language and sexual content make me recommend this for the more mature reader. Explicit violence is pretty minimal (a PG-13 movie would have way more).

Overall: If you can get over the ickiness of Travis's love life, there is some great stuff in here and I'm definitely hopeful of receiving a YA with more focus on the military life in the future.